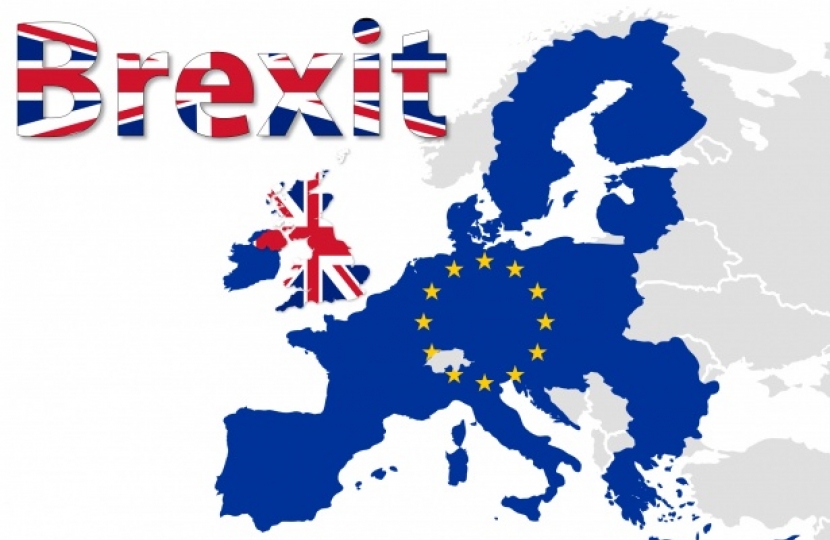 You will no doubt be aware that the vote due to take place on the Brexit deal in Parliament tomorrow been postponed.

I'm hoping to make the following speech in the House today:

In June 2016 I voted to Remain, but the people voted to leave.

I believe with a passion that we must honour that result and leave the EU, but to do so without wrecking our economy.

I believe this Withdrawal Agreement does just that and I will be voting for it next Tuesday, not because I want to be loyal, not because it is a 3 line whip, but because I believe it is the right thing to do for my constituents and my country

This deal means that unless we enter the backstop – and I will come back to that in a moment - we will by the end of December 2020 have left the political and legal structures of the EU, the CFP and CAP, the single market and customs union. It will be a complete and full Brexit. It will honour the vote of the British people.

Ah, but what about the backstop? Therein lies the rub.

When I was a company lawyer I negotiated many acquisition deals of private limited companies, all over the country. All of those deals contained an element of risk because you cannot draft legal agreements which anticipate or cover every eventuality, so that in the end the client, having done due diligence, has to balance risk and make a decision: do I want the deal or don’t I?

We are in the same position now. Is there a risk that we might have to enter the backstop arrangements? Yes. How high is that risk – I think it is modest? There is no reason why the trading agreement cannot be settled by the summer of 2020. We are, after all not starting from scratch – the framework for it has already been agreed. But if it is not settled in time, we could extend the implementation period by a few months. Or by then we may well have found a reliable way of solving the border problem by technology – if we invest sufficient resources into it.

So yes there is a risk we might have to enter the backstop arrangements, but only a fair one.

And there are perfectly sensible mechanisms for us to leave the backstop which do not give the EU a veto. Independent arbitration is a well-used mechanism for resolving disputes out there in the real world.

This is not Hotel California, where you can check in but never leave - this is not us becoming a vassal state, or a colony – some of that language has been quite disgraceful.

We have to weigh the modest risks of entering and remaining in the backstop against the risks of not supporting this deal.

What is the risk of leaving with no deal? We run the risk of a period of economic disruption – of unknown and unknowable proportions. The charge of the light brigade – tariffs to the left of us tariffs to the right of us – into the valley of death rode the six hundred.

A no deal Brexit would probably not harm the people in this chamber, or the many retired people who write to us about Brexit – but it might harm young working families in my constituency.

As one local business owner has said: 'I support the Withdrawal Agreement as it provides the basis for a pragmatic and sensible departure. It gives my business the confidence and clarity about the trading environment for the immediate future. Crucially, it will ensure that my business and many similar manufacturing businesses across this region, does not face a highly damaging and unknown exit next March. The outcome of no deal will make or break companies like mine across the UK.'

There is a significant risk that some would lose their jobs. I do not wish to take that risk on their behalf, when there is a better option on offer.

If we go the other way and hold a second referendum, there is a risk of social unrest and constitutional collapse, and of creating even greater divisions in our broken society.

First of all, have people really considered what a fresh referendum would be like? The debate surrounding it would be as ugly and ill-informed as the first one in 2016 – maybe a lot worse, because divisions have got deeper since then. We would be once again predicting the future it would be riddled with

outlandish claim and counter claim – on both sides – all of them impossible to prove – about what may or may not happen.

Secondly, let’s say that Remain win next time by 52 to 48. Does anybody seriously think that would make this issue disappear? Would ardent Brexiteers just shrug their shoulders and say, - fair enough, let’s stay in the EU?

This massively divisive issue would mar the next 30 years of our politics as it has the past 30. That is the true Hotel California – or even Groundhog Day – stuck in a perpetual debate about membership of the EU. Nightmare on Elm Street.

We have to leave the EU.

The people have already settled this issue. Our job is to implement that decision sensibly.

So the risks of the alternatives are in my judgement far greater than the modest risks of supporting this deal.

The reality is that some colleagues, whatever deal was negotiated would vote against it because in their heart of hearts they want no-deal. They should have the honesty to admit that. They are voting against a sensible Brexit because they want a perfect Brexit, a purist Brexit, which is not and never has been on offer. They run the risk of getting no Brexit at all.

I very much regret the stance of the Labour front bench which says it will reject this deal because it can negotiate a better deal, which is simply not the case. Dishonest politics.

Is this deal perfect? Of course not. I never drafted or agreed a commercial agreement that was. Do we get all we want under it? Of course not – I have never seen or been party to a negotiation that achieved that.

But is it the best deal for our country, when all alternatives are considered? I believe so. Anybody making a proper risk assessment would reach that same