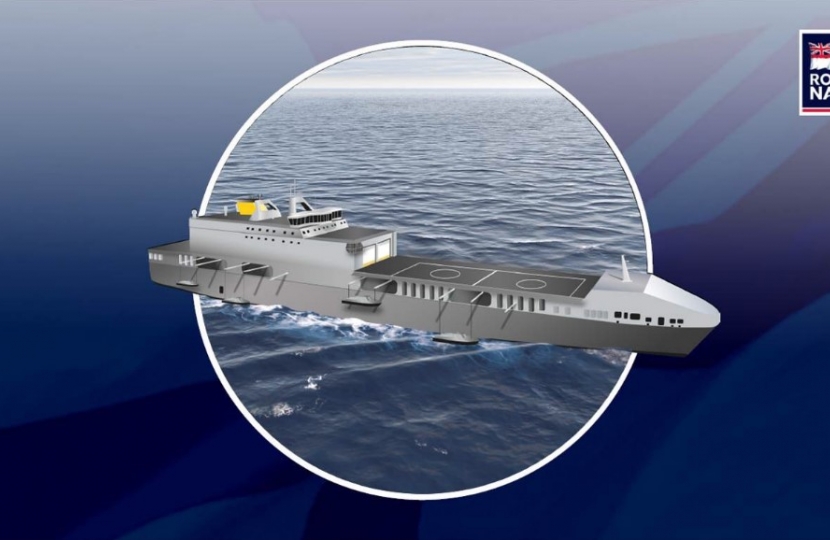 I welcome the announcement by the Secretary of State for Defence today of two new Littoral Strike Group ships joining our amphibious fleet.

These ships would enhance the Royal Marines and Royal Navy's existing amphibious capability and could well be base-ported in Plymouth along with HMS Albion and HMS Bulwark.

I am joining the campaign being led by Plymouth Moor View MP, Johnny Mercer and our Parliamentary Candidate for Plymouth Sutton and Devonport, Rebecca Smith, to see these additional ships base-ported in Plymouth.

The Secretary of State for Defence, Gavin Williamson, today gave a speech in London about how the UK will shape its Armed Forces to meet the defence threats of tomorrow.

The speech included the announcement of two Littoral Strike Group ships. The proposed ships would be a key part of the Royal Marines’ amphibious armoury.

As the base for the Royal Marines’ Amphibious Fleet, Plymouth would be the ideal base-port for these ships. Local MP, Johnny Mercer, and Parliamentary Candidate, Rebecca Smith, have already spoken with Defence Secretary, Gavin Williamson MP, to put the case to him for this base-porting.

Ensuring these proposed ships are based in Plymouth would further shore up the future for the Royal Marines in the city.

“I am delighted that the Defence Secretary is talking about Littoral Strike Ships - a concept many of us for some time have seen the Royal Marines fulfilling.

“The Royal Marines must be given the opportunities to evolve and modernise, and Gavin Williamson’s comments today could herald the start of a very exciting new chapter in the history of our elite amphibious forces.

“My priority is to make sure these are base-ported in Plymouth. I have for many years now made sure that Plymouth remains the centre of gravity of the UK’s Amphibious Operations forces - something we are enormously proud of. The base-porting of these vessels in Plymouth will cement this for generations to come.”

“It is clear, that coupled with the Type 26 announcement, this Secretary of State is committed to defence-basing in Plymouth in a fashion we have not seen for many years. This is fantastic news.

“I will now work hard with Johnny Mercer to make sure that we present no other option but for the Secretary of State to base-port these proposed Littoral Strike Ships in our city, and cement Plymouth’s future as the centre for the UK’s amphibious operations for many years to come.”

“I met Johnny and Rebecca who made the point very clearly to me that the new proposed platforms should be based in Plymouth.

“I can confirm that of course, being the centre of the UK’s amphibious operational units, Plymouth of course would have a very strong case, and I look forward to working closely with Johnny and Rebecca to make this a reality.”