The Future of Rail in the South West to 2034 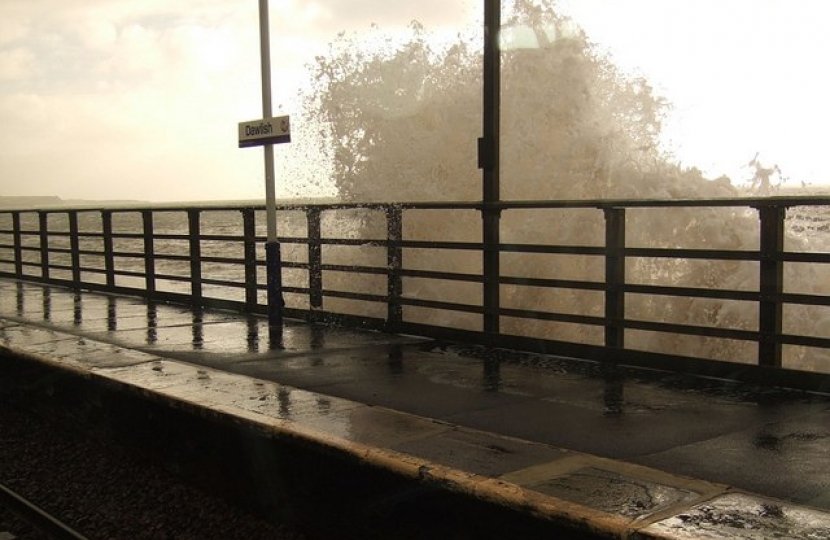 We all remember the storms of February 2014. When the rest of the country finally realised the vulnerability of the rail route into the South West.

Roll back the clock to 1992, and as I stood in my first General Election, one of my campaign pledges was to tackle the rail service in and out of Plymouth and the South West. As with any massive infrastructure system, change comes incrementally. In light of the continuing problems along the mainline from London to Penzance and the raised national and regional profile of this issue, my hope is that we build on years of lobbying and finally see change enacted.

In 2012, the Peninsula Rail Task Force (PRTF) was established to forward plan for the next twenty years, establishing the type and level of investment required to ensure the railway in the South West delivers for the region. The PRTF is made up of a range of stakeholders – representatives from the region’s Local Authorities, the Local Enterprise Partnerships and three Members of Parliament, of which I am one. Following the storms of 2014, the Government commissioned the PRTF to create a plan for rail in the South West up until 2034, taking into account the damage caused and the resulting work and investment to shore up the sea wall at Dawlish and to tackle the flooding on the Somerset Levels.

On 22nd November, the plan was published and presented to the Rail Minister in Westminster. ‘Closing the Gap – The South West peninsula strategic rail blueprint’ breaks the work down into short, medium and long-term goals, with the overall aim being to get the rail service in the South West working for the region, its economy and to see significant growth as stakeholders work together.

Key to the plan is the importance of building resilience and reliability into the network, reducing journey times from London, improving connections to the rest of the UK, and enhancing the quality of on-board comfort and services.

The PRTF’s ask of Government and the rail industry is not small.

Immediate priorities to 2019 are:

• Invest £284m in resilience, including commencing the securing of the main rail line through Dawlish and Teignmouth

• Introduce trains capable of operating along the seawall in all weathers

• Invest £2.5m in looking at options for the diversionary route East of Exeter

• Invest £22m in looking at options for reducing journey times

• Increase frequency to 2 direct trains an hour from Plymouth to London in the new franchise, reducing journey times by up to 10 minutes, whilst at least maintaining existing services

• Work with the rail industry to maximizethe benefits of the new trains from Dec 2018 and invest £25m to make our journeys more productive through on board travelling o ice, media and mobile/Wi-Fi connectivity.

Over the medium term to 2029, the focus is on continuing investment:

• Invest £1.5bn to reduce journey times by up to 14 minutes to Penzance, through infrastructure improvements, partial electrification and franchise renewals

• Invest £358m to improve capacity and comfort through new rolling stock, infrastructure enhancements and phased opening of the Northern Route

The report was very well received by Paul Maynard MP, the Rail Minister, and regular dialogue will continue. Things are moving forward already with the new Great Western Railway trains due to be rolled out in 2018. These new trains, the first since major investment since the introduction of the Intercity 125 High Speed Trains in 1976, will decrease journey times, bring higher frequency of services and increase capacity by up to 25%. Certainly a good start. The Government have also recently announced £10 million for Network Rail to continue the work done to improve resilience at Dawlish. However, as the PRTF report clearly sets out, a multifaceted approach needs to be followed to ensure that we do not simply patch up the existing service, but ensure we develop something fit for decades ahead.

This Friday, lobbying continues in earnest. The Transport Secretary is in the constituency and I will be discussing the PRTF plan with him and the urgent need to get things moving. I am also meeting with the Prime Minister in the coming weeks and will use this meeting to stress the need for improved connectivity in the South West on a number of fronts, most notably rail and superfast broadband, in line with the newly published South West Growth Charter.

This investment opens up the future for the region. For too long we have been the poor relation of the UK, seeing just £35 per head of transport investment compared to the national average of £98 per head over the last 20 years. This fresh, and essential investment, will unlock £7.2 billion of gross value added benefits to the region as a whole and £1.8 billion in transport benefits.

The business economy of the South West is reliant on good connectivity. We cannot see a repeat of the 2014 devastation at Dawlish and the Somerset Levels, which saw the train line out of action for 36 days, cost £1.2 billion, and the Cowley Bridge disruptions affecting 2000 trains over 15 days. To be a major player in the UK economy, we need to be connected to the rest of the country. I do not believe this is too big of an ask of Government and the rail industry. I will continue my 25-year quest to see the change we deserve and will continue working hard to ensure the future looks very different to the present.