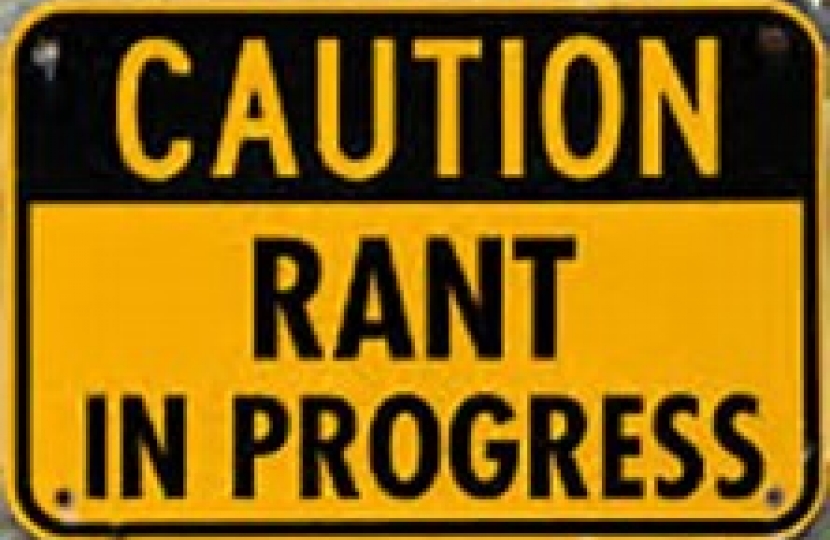 When I left the SDP and joined the Conservatives in 1988, a former member of the Liberal Party described me as Judas Iscariot and wrote to say that she hoped I would follow his example and hang myself! There is nothing new about abuse in politics.

During my first few months as an MP in 1992 that I received a letter full of venomous language. I wrote back in equally aggressive terms: “How dare you….etc” I then had a second letter from the same gentleman saying: “I was so sorry to get your letter. If I cannot get things off my chest by writing to my MP, how else can I express my frustration?” I had learned a big lesson. He was right.

Part of the role of the elected representative is to be a rant-receiver.

We are there for many reasons, but one important part of our job is to be a lightning conductor for the things that our constituents are angry about. So over the years when I receive letters and e-mails from constituents expressing themselves inappropriately I (usually unless having a bad hair daymyself) respond in a polite, though firm, manner.

Being a rant-receiver is part of the job.

it is not part of the job to receive death threats. One of my fellow MPs told me recently that she received an e-mail from a constituent (who took an opposite view to her on Brexit)containing these words: “I warn you against further treachery. I know where your daughter lives.” In fact, she does have a grown-up daughter living in the constituency. The police have been informed.

British political discourse over the centuries has been peppered with issues that raise deep passions: Home Rule for Ireland, coal-mine closures and Poll Tax come to mind. Brexit is right up there with deeply held views on both sides, and no real way to compromise. We either leave or we stay.

The advent of e-mails and social media have enabled everyone to have an immediate say. That is a broadly a good thing, but on the other hand it has placed a new weapon of terror into the hands of a small minority of people who hold extremist views. This can easily snowball and corrupt the wider debate.

In these circumstances, it is even more important that mainstream politicians conduct this passionate debate with measured and appropriate language. We must set an example. We must disagree well.