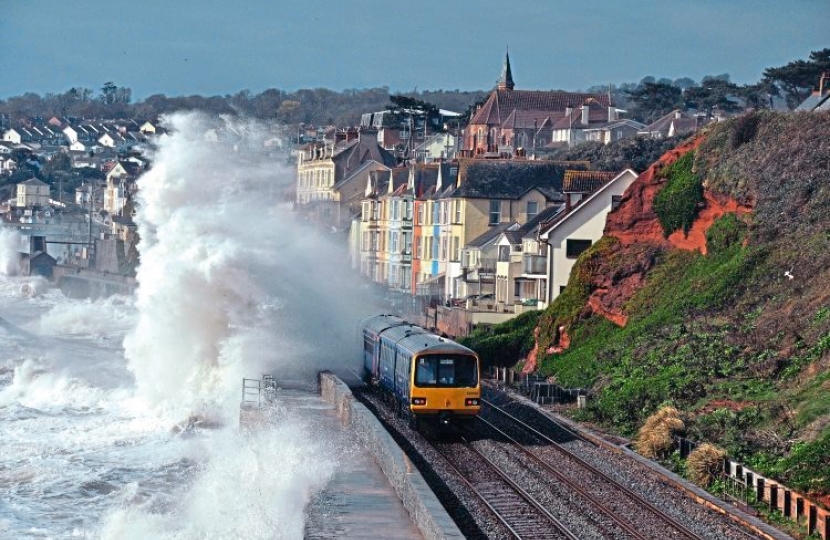 I have been an MP for 26 years, 13 under a Labour government and 13 under a Conservative-led government. For all of that period the transport infrastructure of the south west has not received sufficient attention or investment from governments of all colours.

I hope that at long last we are turning the corner.

The announcement last Friday of the £80 million for the sea wall improvements at Dawlish, in addition to the £15 million already being spent on cliff strengthening was much needed. There is more to come to ensure long term resilience.

This was only part of a much wider strategic plan for the south west launched by the Department for Transport at the same time which is well worth a read. It rehearses the recent improvements to the flooding vulnerability east of Exeter and the Somerset levels. It sets out future line and journey speed improvements, including a new schedule that will provide faster journeys from Plymouth to London. It celebrates the arrival of the new trains (which are fab) and anticipates better rolling stock for the cross-country line to stop those trains from having to be parked up during storms (salt in electrics.)It tips its cap towards the next big leap forward which is to ensure that onboard connectivity is hauled into the twenty-first century – the one big issue that business people constantly demand.

Much of the improvement has come because the Peninsula Rail Task Force, the group that represents local authorities and business from our region, has produced a coherent report, spoken with a single voice and stuck to its guns.

But the strategic plan deals with roads too. The massive work to dual the A303 to Taunton is now committed and I gather the engineering work on the tunnel under/around Stonehenge is underway. The A30 will continue to receive upgrades until it is fully duall-ed, also the north Devon link road. There are significant road improvement schemes, like the one at Forder Valley in Plymouth all over the region.

We are also making progress with the roll out of superfast broadband which is steadily transforming the economy of our region as bright young people come to study down here and then set up some high-tech App-based thingy in their bedroom which then becomes a viable business employing other people.

At long last, for the first time since 1992, I feel our region is getting the transport infrastructure investment we deserve.