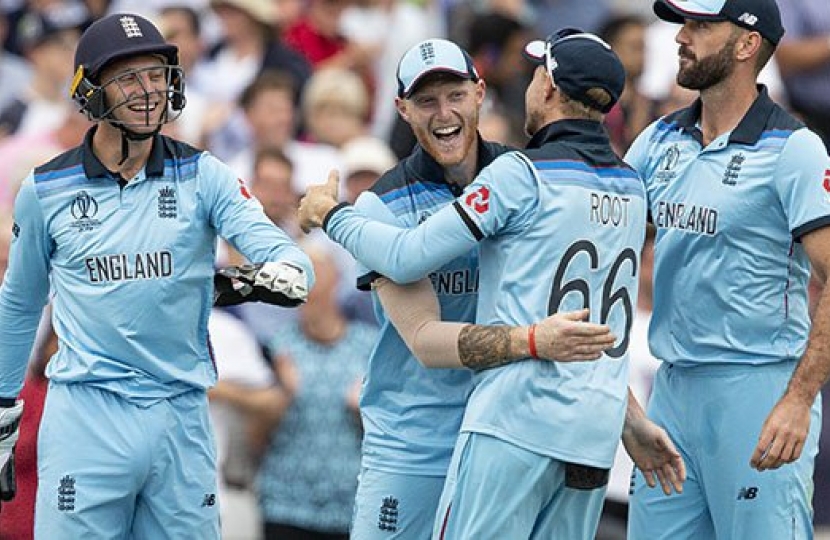 I have long been a cricket fan, but never seen anything like the final of the World Cup. I had to go for a walk at one stage as the tension was too much for me, only to miss the way that Ben Stokes rescued us in the final over. I have watched it several times since.

But reflecting today on that great tense, nail-biting victory that has given the whole country a boost, there are lessons we can learn to help take our nation forward.

First of all, well done to Lords the home of cricket. Old-fashioned, establishment, stuffy even, full of tradition – but to put on a show like that with pyrotechnics, music and modern communications, hats off to you! Organisations which are full of deep heritage, but which do not move with the times (even if at their own pace) will die. Cricket HQ demonstrated on Sunday that it will not be left behind.

Secondly, the English team reflects the diverse but integrated country that we have become. Brilliantly captained by someone born in southern Ireland; our match-winner, Stokes,born in New Zealand, Jason Roy born in South Africa; the final over bowled by Jofra Archer our new fast bowler, born and raised in Barbados, our wicket-taking leg-spinner, a British Asian Muslim.

This is modern Britain and, if I am honest, I love it. That rich blend of cultures and outlooks, is not a problem for our nation – it has become our strength. Yes, we need to do more to encourage integration, especially in some towns and cities; yes there will always be the odd flashpoint – but this is who we are. We must embrace it. There is no way back from this.We learned this at the London Olympics. We saw it again on Sunday.

Finally, just over a year ago, Ben Stokes was in the headlines for all the wrong reasons: caught up in some unpleasant fisticuffs in a Bristol nightclub. He has spent the last year working harder at his game, resolving to be a better person. On Sunday he was simply magnificent and rightly deserved the man of the match award. In just one year he has transformed his reputation. Thank heavens for second chances.

So, a great day, an unforgettable match. But also lessons we can utilise in every aspect of our national life to help understand who we are and take out great nation forward into its next season.