Railway assurances from the Chancellor 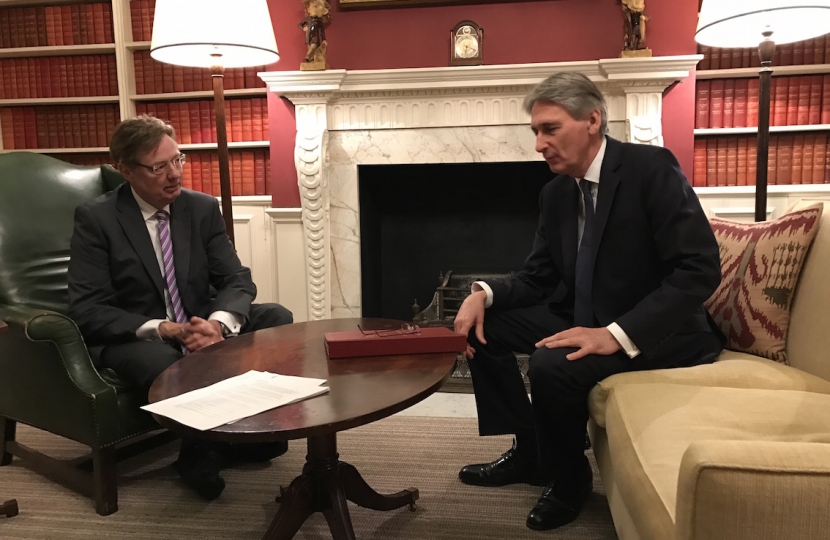 On 9th January I met with the Chancellor, Philip Hammond MP, to raise the crucial issue of the railway in the South West.

Previous Chancellor, George Osborne, was well aware of the need for financial investment to shore up the train line at Cowley Bridge and Dawlish and to improve the route in and out of the South West. He also fully supported the financial promises made by David Cameron when he was Prime Minister. However, with a change in personnel at the top of Government, ensuring the newly incumbent Chancellor is fully aware of the situation was essential. Following the new Transport Secretary's visit to the constituency in December where I was also able to brief him, my meeting with Mr Hammond on Monday provided an opportunity to speak face to face about the vital need for continued Government funding to safeguard and improve connectivity from London and the North to the South West.

It goes without saying that improving the line for leisure users would benefit many. However, the main driver for change is the impact it would have on business in the South West, and as a result, the region's economic development. We cannot risk being physically cut off from the rest of the country as we were in 2014, and indeed as we were to a lesser extent, but no less significantly, last November.

In a recent survey of South West businesses, 75% said that rail is important for their business, 87% use rail for business travel, and 91% said travel to London is important for their business. Added to this, resilience of the rail network is the number one concern businesses have about the industry. The South West has an exceptionally clear case for change and improvement. It is essential that all the major stakeholders - the Government, Network Rail, the franchise holders and all others involved in delivering the rail network - work together to ensure that future rail travel in the South West is productive, efficient and reliable. This is why I lobbied the Chancellor on behalf of the whole region - he is the man with the purse strings and we need him on board.

The Peninsula Rail Task Force (PRFT) published it's twenty year plan for improving the railway in the South West in November. Ironically, on the same day that the line through Exeter was closed meaning those travelling to present the report to Transport Ministers were delayed or missed the meeting all together. The Department for Transport are onboard with the asks, we just need see the funding issues addressed. This is where operating a proverbial pincer movement by gaining the support of both the Chancellor and Transport Secretary is so crucial. It is also essential that we clarify what we want and when. Clearly cutting journey times from London, pushing for earlier arrival times in Paddington and Plymouth, and increasing the number of services per hour in and out of the capital are important. However, an easy win would see onboard connectivity fully established along the whole route meaning businesses travelling to and from cities like Plymouth can conduct business from the train, be productive, and warrant the decision to trade in and out of the region.

The Chancellor has promised to liaise with the Department for Transport to ensure the asks of the PRTF are actioned. However, he was also clear about the ongoing problem of Network Rail's overspend and the very real impact this could have on the plans for rail in the South West.

Network Rail works to five year financial timetables called 'Control Periods'. The current Control Period (CP5) runs its course until 2019. However, NR have already overspent their budget and as a result some schemes are being bumped into CP6. However, we need this money before CP6 begins in 2019. I will keep pushing to ensure that we keep this crucial rail project high on the agenda of both the Chancellor and the Secretary of State for Transport.