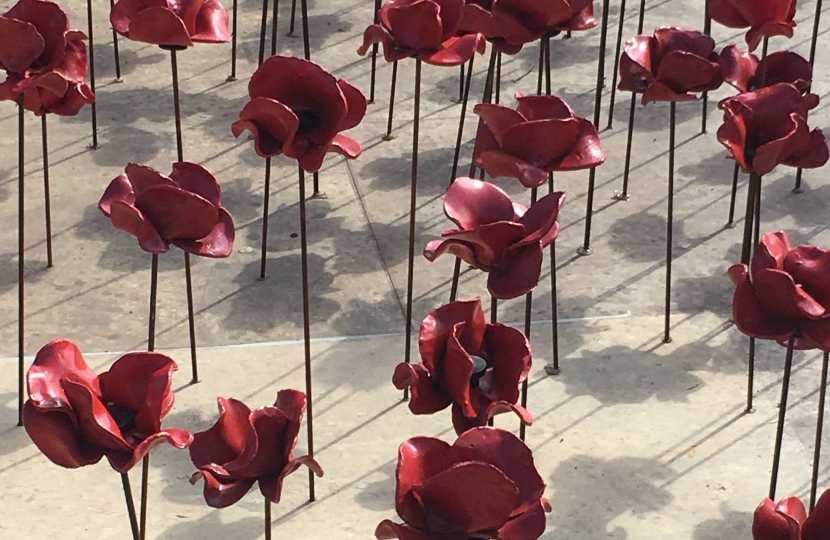 Remembrance weekend is always a poignant time. We remember those men and women who have given their lives in defence of our nation and also those who are still serving on our behalf, stationed around the world.

Living in the South West, with our rich heritage of military tradition surrounding us -  Devonport, Bickleigh, the Citadel, Stonehouse - our remembrance services have an added significance as we stand with the families of those local people who have lost loved ones in conflicts over the last century and more.

On Friday morning, I had the privilege of standing with those in Plymstock whose family members are commemorated at the War Memorial on Burrow Hill. The service which was established by local community activist, Gill Whillock, has been steadily growing in size and saw representatives from the Armed Forces, local schools and the community joining together to remember those who have given their lives.

Local hero, Mark Ormrod was honoured by the City of Plymouth at a presentation at the Lord Mayor’s residence on the Hoe on Friday afternoon. Mark was serving with the Royal Marines in Afghanistan when he stood on a mine and was left a triple amputee. It was incredibly inspiring to be present as his achievements were recognised, including his most recent successes at the Invictus Games in Toronto where he won two silver medals.

Friday evening saw the annual Festival of Remembrance at the Pavilions and Sunday morning the Service of Remembrance at the War Memorial on the Hoe. Both events are always a reminder of what brave and courageous men and women we have in our city and region, both those from Plymouth and Devon and those who due to their work in the Armed Forces, are stationed here. The Poppies: Wave exhibit at the War Memorial also provides a stark reminder of the number of men who died at sea on ships setting sail from Plymouth in both World Wars. We have a lot to remember them for and a lot to be thankful for. And remember them we will.

This region has long been a place of excellence for our armed forces, with our Naval Base and Dockyard being centre stage. We are also the home of 3 Commando Royal Marines who make us all so proud.