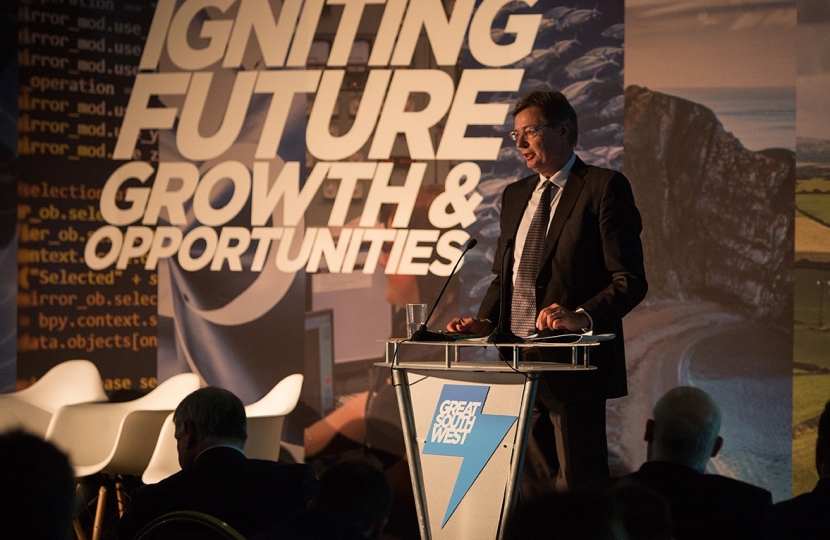 I was delighted to attend and address the South West Growth Summit 2017 in Exeter last week.

A range of high profile speakers from across the region and beyond took part in the event, including Chris Loughlin, Chief Executive at Pennon (incorporating SouthWest Water), Rain Newton-Smith, Chief Economist at the CBI and Steve Hindley CBE DL, Chairman of the Midas Group Ltd and the Heart of the South West LEP. Rt Hon Sajid Javid MP, Secretary of State for Local Government and Communities also addressed the South West Growth Summit 2017 in a pre-recorded film.

Whilst it was a fascinating morning, I used my speech towards the end of the event to challenge everyone present that we need to take further action to ensure we build on the achievements we have seen since 2016. We will have missed a vital opportunity if nothing further has changed between now and next year’s summit.

When I was first campaigning to become an MP in 1992, I said that the biggest challenge facing the South West was our peripherality and that the solution was better rail and road connectivity. As we continue the work to achieve this, in 2017, we can also add in the drive for digital connectivity too, a crucial ask of Government to see the fulfilment of the South West’s potential.

However, to make our voice even louder as we push for stronger transport and digital infrastructure, we need to do even more as a collective of business leaders, educators, innovators and politicians.

The two main things which will see results as we drive forward are pursuing clarity over the definition of our region and upping the leadership and co-ordination of the Great South West vision.

Compared to the easily definable North East, Midlands or Greater Manchester regions, the South West refers to different geographies at different times and places. Sometimes 7 counties including Bristol and Gloucestershire, at other times just 4 counties, and at other times another definition altogether.

Clarity on what we mean when we say ‘South West’ is essential if we want to make sensible asks of Government. It is also important that a small leadership is formed to take forward this vision and translate it into practical steps. Government is not going to come to us, we have to go to them and get what we want.

I am more optimistic that we can achieve these things together for our region than I have even been in the 25 years I have been a Member of Parliament.

A lot has been achieved already and Government is listening to us. To enable us to deliver it is imperative that we are clear on who we are as a region, what we are asking for, and have clear coordination in place as we pursue our aims together.