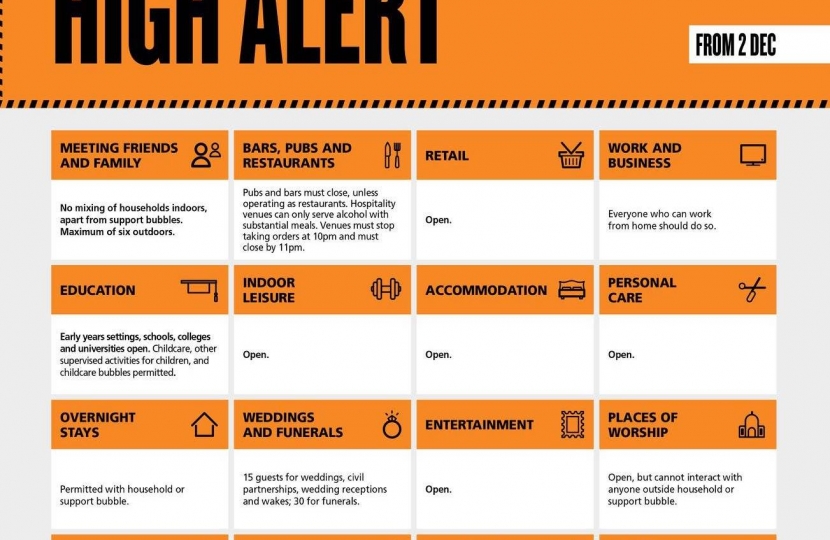 So, we are in Tier 2. It was not what I wanted but given that only Cornwall and the Isle of Wight are in Tier 1, I will reluctantly accept it and vote for it next week. Obviously this will protect our local hospitals. But, it is not good news for the local hospitality sector in the run up to Christmas in that only people from the same household or support bubble can have a meal out together. This is still worth having, as many couples and social bubbles enjoy eating out together, but it is not as good as Tier 1 where households can mix in groups of up to six indoors. This would allow a larger family or social group to go out for a meal together. I imagine that the restaurants on the Cornwall side of the border with Devon will do a roaring trade.

The cavalry is coming over the hill soon in the form of the vaccines that should end this nightmare by Easter. Perhaps that is appropriate given that the underlying message of Easter is hope and new life.

We could see from the figures that the Chancellor revealed this week that getting through Covid will not mean we are out of the financial woods. Roughly £300 billion extra spent on tackling the virus, all of it borrowed, and an economy that has shrunk by 11%. Unprecedented figures. We will all have a part to play in working our way out of this hole.

Which leads me on to public sector pay. During the past 12 months many of the 83% of people working in the private sector have lost their jobs or taken pay cuts of up to 20%. Many self-employed people have lost a lot of income. Not all have been compensated. Many businesses have been devastated.

Most of us in the public sector have continued to be paid in full. It seems to me to be perfectly fair that next year, the 17% of us paid by the public purse should bear some of the pain the private sector has endured. We are of course protecting nurses and doctors and the lowest paid.

Of course, I include MPs in this. Our pay is not within the gift of the government or even Parliament but is determined by an independent body known as IPSA. They have recently been consulting on whether our pay should be linked to the formula that has been in place for several years. I have written to them this week saying that it would be unconscionable if we got a pay rise next year when many in the public sector did not.

A second opportunity in two weeks to ask the Prime Minister a question at PMQs.

Today, I used the opportunity to ask the PM the following question: