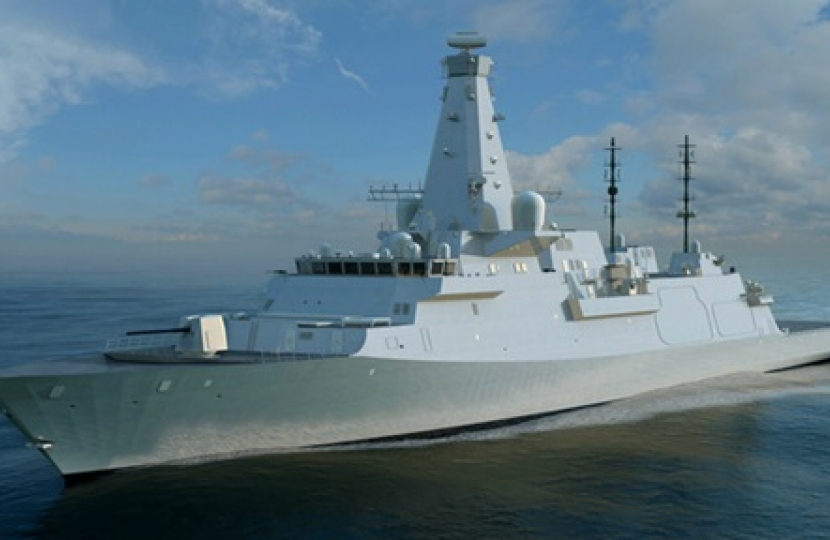 I am often found Chairing debates in Westminster Hall - the smaller yet essential debating chamber off the most ancient and original part of Parliament. Yet earlier this week, a short debate took place on the case for basing the Royal Navy’s new Type 26 frigates at Devonport and I was there to take part rather than Chair.

The campaign to base the new Type 26 frigates is something which Oliver Colvile, the MP for Plymouth Sutton and Devonport until last year, started, supported by Johnny Mercer MP and me. In true cross-party style, Oliver's Labour successor, Luke Pollard MP, is continuing the campaign in Westminster alongside me and Johnny, and it was Luke who secured the debate this week.

Given the cross party support for this campaign on both a national and local council level, all three Plymouth MPs were there to contribute to the debate and hear what the Defence Minister, Guto Bebb MP had to say by way of a response.

In his opening statement, Luke made a clear and comprehensive argument for the basing of the Type 26 frigates in Plymouth, agreeing with me that those serving, who along with their families, choose to base themselves in each of our constituencies, make a massive contribution to the city’s fortunes and community. Johnny pushed the Minister to make his decision on the base-porting as soon as possible to reassure the people of Plymouth and the surrounding towns and villages who have a stake in the Royal Navy, the Royal Marines or indeed the Dockyard itself.

The Minister was reassuring to a significant point. He stated how HMS Albion and HMS Bulwark, the Navy’s amphibious vessels which I have mentioned several times in recent months, are not due for decommissioning for at least 15 years - meaning 15 more years based in Devonport. This is a great result following the lobbying Johnny, Oliver and me did prior to the 2017 General Election.

Here are some key parts of the Minister’s response to the debate:

It is right to describe the Plymouth campaign as city-wide, and the campaign is appreciated. It was certainly difficult not to come away from my visit to Plymouth with the strong impression of the support afforded over centuries to the Royal Navy by the people of the city of Plymouth. I appreciate the passion displayed by all hon. Members, the three representing the city in particular, and the Ministry of Defence and I understand the feeling behind the speech.

The decision on the base-porting of the Type 26 is an important one that will have to be taken sooner rather than later. When we take that decision, we shall take into account a number of factors that have to be considered seriously and carefully, as the hon. Member for Plymouth, Sutton and Devonport will understand. We shall be looking at issues of logistics, infrastructure and personnel. On personnel, I echo the tribute he paid to the Royal Navy crews who man the frigates already based in Plymouth and to their support staff, whether military or civilian.

On the timing, does the Ministry of Defence grasp the issue about us needing a commitment not even sooner rather than later, but before the summer recess? We need a decision point that we can look at, and take back to people and say, “Yes, we will get a decision on it,” so that we will have delivered something from the campaign.

My hon. Friend tempts me to offer an answer now, but I am sure he understands that it would be remiss of me to make such a commitment now, especially as we are still awaiting the completion of the Modernising Defence Programme. However, I stress again that we are looking at the issues seriously, including training, force generation and cost. We will certainly make an announcement before the end of the year. I anticipate that we might be able to make announcements before then, although I would not want my hon. Friend to come away thinking that the intention is to have an early decision. We are trying to ensure that we make a decision based on the facts of the situation, and I assure my hon. Friend that the support that Plymouth is showing for the campaign is being taken on board. Plymouth’s capability and the capacity as a naval base is also understood by the Ministry of Defence. I hope that gives some reassurance, if not the exact dates that he was looking for.

Ultimately, we are looking very carefully at the rebasing; the fact of the matter is that we are building an enhanced Royal Navy. We will have more surface ships in the Royal Navy than we have had for a long time. We have seen the Royal Navy grow for the first time in a long time. All these decisions are under review. That is why it is important to understand that the decision on the Type 26 is not being taken in isolation. We are making decisions in the context of a growing Royal Navy. I suspect that every Member who has spoken in this debate would welcome the fact that the Royal Navy is growing. The reason for that growth is the new challenges that we face and the demand that we respond to them, and some of those were articulated by the hon. Member for Plymouth, Sutton and Devonport.

We are aware of the long-standing support offered to the Royal Navy by Plymouth and the Devonport base since 1691. There is a 300-year history. It is very difficult to visit Plymouth without being moved by the contribution that the city has made to the prosperity and the protection of this country over 300 years. Clearly, the size of the estate is unique. It is the largest base of its kind in Europe, stretching over 940 acres, and has more than 100 listed buildings and 3.5 miles of waterfront. This is a base that has been providing support for our Royal Navy for a very long time. That history is clear from visiting the city of Plymouth.

It is important to highlight that the Type 23 frigates have been and remain a significant part of the activities in Devonport. The decision to base the eight anti-submarine Type 23s in Devonport was correct. That decision has resulted in more coherence in our basing.

The situation in Plymouth and Devonport is still a significant success story. I acknowledge that there are challenges, but the activities taking place there—the flag officer sea training, Royal Marines Tamar and the commitment for the new oil jetty that has been built at Thanckes—are commitments and expenditure that highlight the fact that there is a very positive future for the base at Devonport. That positive future is not because we owe anything other than the right decision for the people of Plymouth, but that right decision will reflect the history of service and support that has been offered to the Ministry of Defence and the Royal Navy by the people of Plymouth and the people involved in the bases in Plymouth. We should be very proud of the fact that it is a key component of our defence infrastructure. The continued added investment made by the Ministry of Defence highlights the fact that there is a bright future for the base in Devonport.

The cross-party fight to ensure these comments from the Minister remain a reality for Devonport and Plymouth continues.

You can read the while debate here.