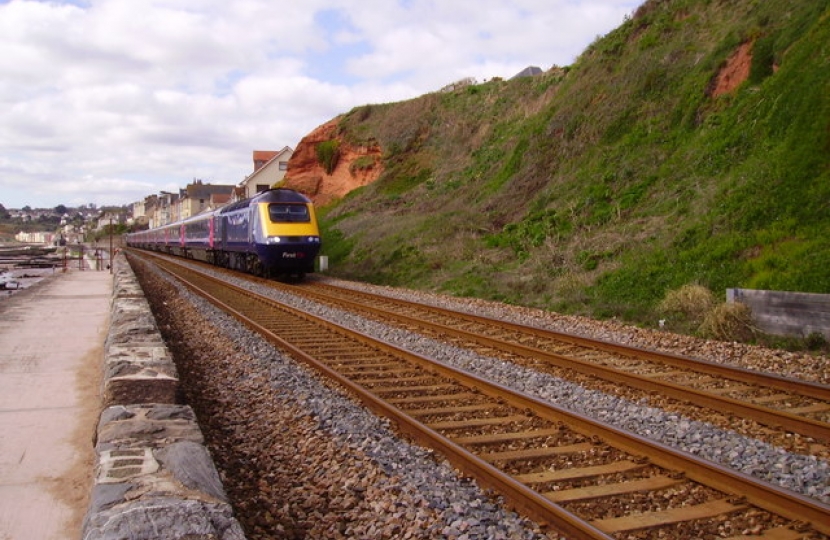 Back in January, after a number of South West Conservative MPs threatened to vote against the Government on a key HS2 vote in Parliament, we finally got some movement on the long-awaited Government response to the ‘Close the Gap’ railway report.

The Peninsula Rail Task Force (PRTF) first presented its report on the future of South West rail link to the Government back in November 2016. We have finally received a response to this report from the Government, coincidently (and ironically) around the time we saw the train line at Dawlish out of action yet again due to Storm Emma and the associated high winds and tides last week.

I am aware that the response does not promise the quick fixes many people are looking for. You will also observe that it is realistic about the length of time it will take to deliver the changes the Government is committed to.

However, we are promised more action than we have seen for generations and I remain positive that if we are in this for the long game, we have to be realistic about the timetable for change. We are all looking to see significant and long-standing solutions to the weak spots on the existing routes and alternative routes put into place, ensuring that the South West peninsula thrives in the medium to long term, and clearly there are no more quick fixes.

I know we were all desperate for some kind of miracle cure for our railways but the reality is that it will be a really hard slog with incremental advances over 10-20 years.

I remain committed to fighting for the funding required to ensure the South West peninsula is never cut off again. It’s not just about the rail, it is also about road and technological infrastructure. Working behind the scenes, lobbying Ministers and Departmental officials is key. Public grandstanding is not enough. In particular, I will continue to liaise directly with both the Secretary of State for Transport and his Ministerial team to ensure the issue of transport links to the South West remains at the forefront of their minds and the begin delivering on the commitments they have made.

You can read the full response from the Government by downloading the attachment below.