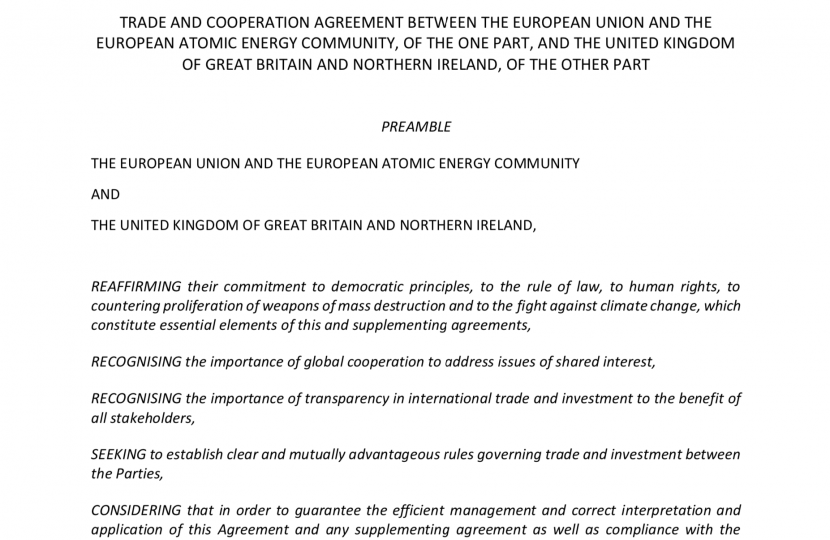 Reading any international legal agreement is a bit like banging your head against a brick wall, especially the case with any EU Agreement. I do not know how anyone without a legal background can make head or tail of the archaic wording. Nonetheless, I dutifully waded through the relevant portions of the new trade deal on your behalf and can confirm that the press and political reports of the agreement are broadly accurate.

When I used to negotiate legal agreements on behalf of clients, I learned that the best deals are fair to both sides. This one strikes me as coming into that category – which I welcome because I would like to think that our relationship with our EU friends will only get stronger from here on in. We used to be the continual grit in the oyster, the awkward member of the family. Now we can be the friendly neighbour, trading constructively with the people next door.

Although I voted to remain, the people of this country voted to leave and as I have said many times, our democracy trumps all. The agreement does do what was promised: it takes back control of laws, borders, finance and waters. It also provides for free trade in goods – no tariffs or quotas. Businesses can now invest in the UK knowing that they have access to EU markets without some of the suffocating bureaucracy. It is quite a remarkable feat of negotiation, only made possible by the PM making it clear he was prepared to walk away if we did not get a deal that recognised our newfound sovereignty. Well done to our negotiating team.

I am getting some emails from people who believe our fishermen and women have been betrayed. Nonsense! They will now get an incremental increase in the amount of British waters they can fish, rising from roughly 50% to 66% in 5 years, and from then on whatever we can negotiate upwards from there. Even Norway does not fish all of its own waters. Our fleet could not handle more than this incremental advance and without this deal would have struggled to land fish in EU ports. The government intends to invest £100 million in our fishing industry over 5 years to help them expand. This is a good deal for them too.

So it is over then: the issue that has blighted British politics throughout my entire career. My first Parliament in 1992 was hamstrung by the Maastricht Treaty and it went downhill from there! Now we can carve out a new role for ourselves as a liberal free trading nation and a force for good in the world.

A second opportunity in two weeks to ask the Prime Minister a question at PMQs.

Today, I used the opportunity to ask the PM the following question: