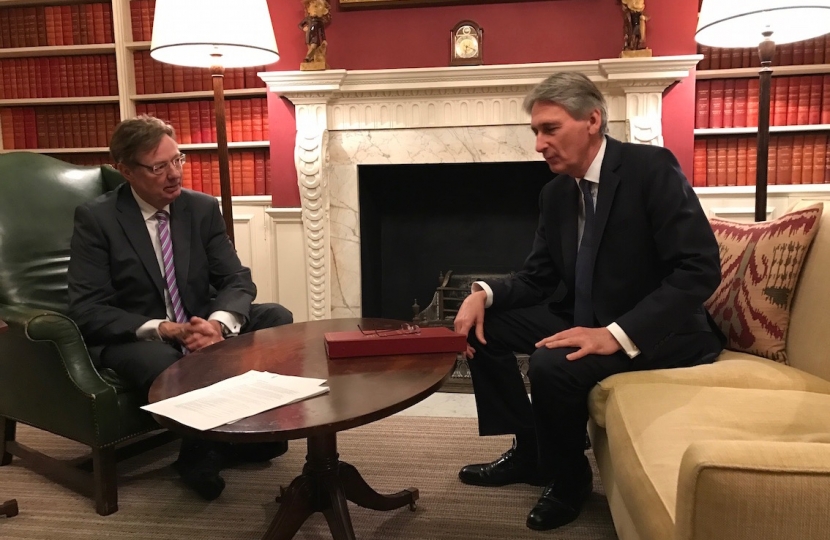 In the autumn we will hear government’s response, but we can expect it to be positive, with more investment into our railway and backing for this region’s plans. In the meantime millions are being spent on making our vital rail link more resilient, around Dawlish and elsewhere.

Brand new state-or-the-art trains will be rolled out on our Paddington line from 2018, and the government has announced plans to radically improve on-board connectivity.

Plymouth will be getting a new railway station, hopefully in time for the Mayflower 400 celebrations. After many years of effort, finally we are seeing this region receive the infrastructure investment we deserve.

I have played an active part in achieving these improvements and recently met with the Chancellor to ensure they are on his agenda. I will to continue fighting the battle in the new Parliament, post the 2017 General Election.

Railway assurances from the Chancellor

On 9th January I met with the Chancellor, Philip Hammond MP, to raise the crucial issue of the railway in the South West.

The Future of Rail in the South West to 2034

We all remember the storms of February 2014. When the rest of the country finally realised the vulnerability of the rail route into the South West.

Making progress on the railway line at Dawlish

I welcome the announcement today that the Government is investing an additional £10 million into the mainline between Exeter and Newton Abbot.